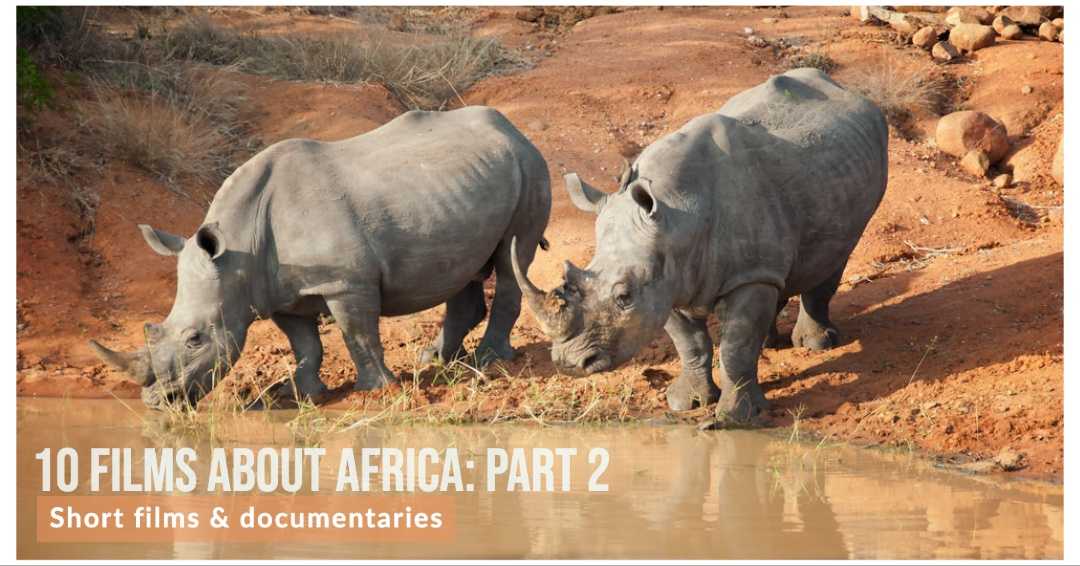 If there is must in African film folklore, it would definitely be this movie. Starting with a bottle of coca-cola that falls from the sky this movie will have you entertained and laughing for its entirety.

Synopsis: The Gods Must Be Crazy is a 1980 South African comedy film written and directed by Jamie Uys. Financed only from local sources, it is the most commercially successful release in the history of South Africa’s film industry. Originally released in 1980, the film is the first in The Gods Must Be Crazy series. It is followed by one official sequel released by Columbia Pictures. Set in Botswana, it follows the story of Xi, a San of the Kalahari Desert (played by Namibian San farmer Nǃxau ǂToma) whose tribe has no knowledge of the world beyond, Andrew Steyn (Marius Weyers), a biologist who analyzes manure samples for his PhD dissertation, and Kate Thompson (Sandra Prinsloo), a newly hired village school teacher.

If you loved it, there a 2nd and 3rd one.
Click here to watch

With the numerous elephant rehabilitation centers we see in social media, the David Sheldrick Wildlife Trust is perhaps one of the best known organization in terms of the rescue and rehabilitation of elephants into the wild. Here, our private guide Tristan Dicks, gained invaluable experience and knowledge while working at the Rehabilitation center in Nairobi, experiencing first hand the intricacies of the elephant poaching crisis and the challenges of rehabilitating elephants back into their natural environment.

Synopsis: Africa’s elephants are hurtling towards extinction to fuel the worldwide ivory trade. While conservationists howl and corrupt governments fail to address the ongoing slaughter, one brave family has been working for decades to stem the tide, one elephant at a time. Gardeners of Eden is a gripping, first person experience inside the operations of Kenya’s David Sheldrick Wildlife Trust. From the front lines of the crisis, we witness their heroic efforts to stop poachers in the bush, rescue the orphans of slain elephants and raise them by hand, until one day, returning them to their home in the wild.
Click here to watch

Rhino poaching is perhaps one of the biggest challenges South Africa faces a nation, from our doorstep in the Kruger National Park two to the dingy back rooms of Vietnamese traffickers, brave women go deep into the poaching and rhino horn trafficking network.

Synposis: Two first-time filmmakers explore the war for rhino horn. Initially setting out on a six-month project, the duo leave their jobs, sell their homes, move in with their mothers and give up nearly four years of their lives to document not just the rhinos but the various people connected to this iconic animal.
Click here to watch

This is the fascinating tale of the Sycamore fig and life around it. Perhaps one of our favorite documentaries of all time, this documentary will show you the complexities and the life sycamore fig sustain, from tiny wasps to an elephant family.

Synopsis: It may be one of nature’s oddest couples: a tiny wasp that can barely be seen, and a giant fig tree, the sycamore, which shelters a remarkable menagerie of wildlife among its limbs.The Queen of Trees shows this delicate dance of survival in exquisite detail, including spectacular close-ups of the wasp’s remarkable life inside a ripening fig.
Click here to watch

There is no silver bullet for conservation, and Kenya’s elephant poaching crisis is a complex economic, cultural and social issue. A great insight into the life and motives of those who decide to take an elephant’s life.

Synopsis: In a Kenyan town bordering wildlife conservation land, a small-time ivory dealer fights to stay on top while forces mobilize to destroy his trade. When he turns to his younger cousin, a conflicted wildlife ranger who hasn’t been paid in months, they both see a possible lifeline. For the poachers, conservationists are not only winning their campaign to value elephant life over its ivory, but over human life as well. Who are these hunters who will risk death, arrest, and the moral outrage of the world to provide for their families? Director Jon Kasbe followed the film’s subjects over a three-year period, gaining an extraordinary level of access and trust as he became part of their everyday lives. The result is a rare and visually arresting look through the perspectives and motives of the people at the epicenter of the conservation divide.
Click here to watch

A eye-opening short film about the chimpanzee population in Guinea. A wonderful story of coexistence with these endangered primates and the human population. This delicate balance however is on the brink as bauxite mining encroaches on the forest and damages the natural sources.

Synopsis: In the highlands of Guinea, people and chimpanzees live peacefully side by side. Myths and stories — and a mutual respect for one another — have preserved this relationship for generations. Now, however, both people and chimpanzees are being pushed out of their homes by bauxite mining, which risks killing thousands of chimpanzees and displacing tens of thousands of people. Once sharing the same water source and fruits from the land, both now struggle to survive. Guinea has the largest population of chimpanzees in West Africa. Protecting their home in Guinea is one of their last chances of survival.
Click here to watch

Not our typical suggestion but this film is definitely worth a watch. This isn’t a short film about wildlife but it brings to the light the “street surfers” that you will probably have seen when you have visited Johannesburg, and their efforts of making recycling their way of living. A must see and an eye opener for all the plastic we consume.

Synopsis: Frank Solomon, a big wave surfer and marine activist from Cape Town, South Africa, travels to meet two exceptional men, Thabo and Mokete, who indirectly serve the environment through recycling as a means of income.
Click here to watch

A yet utterly incredible Attenborough film series for all of us wanting to marvel at the beauty of the natural world. This series focuses of the stories of 5 endangered species (3 African ones) and the challenges they face to ensure their legacy lives on.

Synopsis: Follow the true stories of five of the world’s most celebrated, yet endangered animals; penguins, chimpanzees, lions, painted wolves and tigers. Each in a heroic struggle against rivals and against the forces of nature, these families fight for their own survival and for the future of their dynasties.
Click here to watch

A short docu-series that aims to follow the lives of two mothers, a lioness and a cheetah, as they try to raise their cubs into adulthood.

Synopsis: follow the lives of two special big-cat mothers; Mabaibai the cheetah and Nyeleti the lioness. Discover the different trials and tribulations that wild mothers face while trying raise their adorable cubs in one of the most beautiful parts of Africa, the Lowveld of South Africa.
Click here to watch

Synopsis: Remixing Madagascar follows Ben Mirin on his exploration of Madagascar’s wildlife, music, and conservation. Ben set out to explore the island and record the sounds of the country’s unique lemurs, birds, and other animals. Utilizing these recordings, Mirin transforms the voices of nature, along with those of the people he meets during the journey, into original music that celebrates the biodiversity and conservation of one of the most unique places on the planet.

This site uses Akismet to reduce spam. Learn how your comment data is processed.

Copyrighted Image - unauthorised download or use is not permitted